This is an interesting block to plan and do.  We actually started this block with a trip my sixth grader took to Luray Caverns in Virginia over the summer before our school year officially began.  We also took several trips to places of geographic interest in our state.  I think this is the best student and teacher preparation for this block – to really identify what is in your own state and go there!

The resources I used to plan this block included:

I took the broad view with this block, which was inspired by the Christopherus Curriculum “Rough Guide to Sixth Grade”, where Donna Simmons mentions to try to “weave” geology, biomes and weather together.

I  mapped out the major themes in this way, starting back with fifth grade botany:  plants —>biomes—> geography /geographic features influenced by —> water, wind, climate —>climatic change using glaciers as an example —>moving into more traditional mineralogy starting with granite and ending with a summary of rock cycle, metal ores and salt.

So, we started  by  picking up our botany main lesson book from fifth grade and reviewing plants.  We spent time outside looking at different habitats and biodiversity of plants and the animals that  we drawn there because of those plants.  We reviewed ecology terms (what is ecology?  what is biome?  a habitat? biodiversity?  a climax community?) .  Using the Nature Institute’s free plan, we talked about plants as food and a what a food web looks like in different habitats and investigated the introduction of the European Rabbit into Australia and other cases in our own state where the food web became altered by introduction of non-native species. We spent time talking about plants as producers, and plants that we eat and who/what are decomposers or consumers of plants. 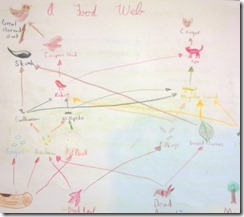 That was our first week and a half or so.  During our second week we moved into talking about how plants are found in certain geographic locations in the world and are grouped into biomes.  We talked about succession and made a biome map of North America.  We also started reading the Jean Craighead George series of books (very easy to read aloud, thin with pencil drawings) and our daughter has been working on drawing or painting each biome.  (This project has extended on past when the mineralolgy block officially ended, as have some other pieces that I mention toward the end of this post).

Biomes depend upon climate and weather (rainfall).  Biomes are distributed throughout the world and are a way we can describe parts of the world.  The other way we can look at the world is through geography.  So we reviewed geographic terms and did some modeling of different geographic forms.  No  landform is static, of course,  and is affected by wind, water and weather. Our daughter wrote an original composition about the water cycle from the standpoint of a raindrop and also drew this in oil pastels.  We also talked about wind – trade winds, equatorial winds, westerlies, polar easterlies, etc in map form and lastly about weather and the five zones of the earth from a climatic standpoint.

The poem “Fire and Ice” by Robert Frost became our theme now, and we worked with this poem in movement and copper rods and finally captured it in our Main Lesson Books:

From there we moved into glaciers shaping the land and how granite was shaped by weather.  We have a great example of that in our state in Stone Mountain, an erosional remnant of granite called a momadnock.   Our local science museum also had a wonderful granite cube we got to see and touch.

Next we talked about limestone ranges and  caves.  We did a veil painting of a cave:

The best instructions for this that I have found were in Elizabeth Auer’s book.  These paintings take several days.

Then we moved into igneous rock formed by molten magma.  We painted volcanoes, made a clay volcano, (we had also previously made some in the earth too!),  did some growing of salt crystal experiments and talked about basalt, obsidian and pumice.  Then we summarized the three types of rocks, how they are made  and looked at rock and mineral  examples.  We headed to our local science museum, which has a terrific display of rocks and minerals from our state and the southeast.  We talked about specific mineral properties, especially streak and hardness, and finally ended with the classic picture of the rock cycle. 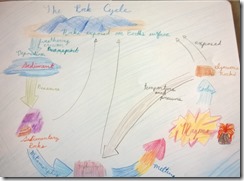 We finished up with talking about marble (from limestone) and coal. I actually had samples of coal to look at from the Coal Mining Association.  We also looked at fossils as part of the record of the earth just like rocks and minerals are.  There were great examples of this at both of the museums local to us.

The last thing we need to do is take a visit to our local gold mine and talk about mineral ores.  I think we will do this in spring, and add it to our book then.  And, we still have the book “Salt” to read and talk about.  I want to do that as I think it is an important foundation for the human body in physiology, in seventh grade, and also an important basis for trade in discussing countries in Africa next year.

So, mineralogy, the block that never officially ends…