Part of this fourth grade year looks specifically at animals,usually in two separate blocks, for several reasons.  One reason is in part because children of this age just love animals, but also because once past the nine-year change children are fully ready to move into how they themselves relate as individuals to the natural world.  Steiner felt zoology and botany were also necessary precursors for children to really be able to delve in and understand history well from the age of twelve onwards (You can see the lecture “Teaching History and Geography” in The Renewal of Education if you are interested more in this connection). And, like all subjects in Waldorf Education, this one is really also about the upright human being and the moral education of the student.

Steiner’s idea was to help children of this age to develop a relationship with nature.  He lectures in “Teaching Zoology and Botany” in The Renewal of Education:  “As children, we need to develop that relationship by being taught about nature in the proper way.  It is of no help whatsoever when we describe the various classes of animals or types of plants and so forth to the children and then, in order not to be too dry, we go on a walk with the children to show them the plants outdoors.  This is not at all useful….”

He goes on to talk about the prevailing wisdom of the time, that materialistic natural science says that lower animals existed in very early times and that they slowly developed and became more complete.  Yet, in animals we can see a certain one-sidedness and in looking at ourselves as human beings we see how we can do so many things but are not suited for any one thing in particular in comparison to our animal friends.

For example, a bird “….(has) adjusted to the air, they have adjusted their entire life to something that corresponds to the inner form of the lungs and such things in human beings…..Each group of animals is particularly well-developed in one direction or another.    “Everything in the animal realm you find things that point to the human being.  People can feel how they are a synthesis of all the one-sided aspects of the animal realm.”

And you might say, whoa, this doesn’t sound like zoology.  But it truly is; it is observation of the animal, and how that animal might relate to something a ten-year-old intricately knows: him or herself and how we relate to that animal.   It sets a solid foundation down for future biology, a solid foundation of observation and does absolutely not preclude using technical books, field guides, facts about animals, writing a report about a certain animal, etc. but it includes how this all relates to the upright human being.   “We thus connect everything the children observe in the animals with the human being.  We therefore have a possibility of placing all aspects of the human being in front of the child’s eyes by directing the child’s eyes outward.”

It is a lot to digest obviously, and so, I had to think about this block and how I wanted to present it.  And in some aspects I veered away from what a Waldorf School would do because I am a homeschooler and my homeschool is particular to my family.  My faith is who I am, and I wanted to incorporate a Christian view of the animals and creation and man’s place in it.  Steiner’s look at animals is indeed vastly different than Darwinism, but I also find his view of evolution and such to be still different than a traditional Christian view.

So I thought about it.  I thought about Third Grade and Adam naming all the animals, and how in the book, “Do Something Beautiful For God”, Orthodox writer Anthony Coniaris wrote:  “When God created the heavens and the earth He made creation to be a cosmic temple with Adam as its high priest. “  Albert Einstein wrote, “The most beautiful and most profound emotion we can experience is the sensation of the mystical.  It is the sower of all true science.”  I think this is true, especially for a fourth grader who doesn’t need a college-level comparative biology class – I have taken those and a fourth grader is not there yet!  However, this is time to talk about facts about animals, read animal stories and factual books, go on lots of field trips (we went to the aquarium, the zoo, a farm, and a nature center), look at the human beings in these environments and how they interact with the animals as well, learn a lot of poems and songs about animals, and then come back and synthesize all of this into some main lesson book entries.  The main lesson book really is a small part of this block.

So, with these ideas in mind, this is how I crafted a block that I hoped to be true to our family, true to the spirit of Waldorf Education, enliven the study of animals and whet the appetite of my fourth grader for more and more science and also stay true to our religious beliefs.

We started with the “Prayer For Joy in God’s Creation” from the Book of Common Prayer:

O Heavenly Father, who has filled the world with beauty: Open our eyes to behold thy gracious hand in all thy works; that, rejoicing in thy whole creation, we may learn to serve thee with gladness; for the sake of him through whom all things were made, thy Son Jesus Christ Our Lord.  Amen.

We went out and traced my fourth grader lying down (and all the siblings too) and decorated the forms.  My fourth grader then drew a picture of herself in her main lesson book, and we began to list all the things she could do.  We thought about our heads, how they are round (Marsha Johnson’s free fourth grade files about Man and Animal talk about this approach extensively) and drew a picture of her as a cosmic human being – a sun for the head, stars for the hands and feet raying out into the world (our actions, no?  Of course I didn’t say that.

), a crescent shaped moon for the body.  We painted over that with diluted blue watercolor paint as a crayon resist…and then she copied this prayer into her main lesson book:

“At Your command, all things came to be:  the vast expanse of interstellar space, galaxies, suns, the planets in their courses, and this fragile land, our island home.  You also made me in Your image, a Holy Mystery.” (From the Book of Common Prayer).

We talked about our heads and how our head sits up there quietly even if we are running and jumping around.  That head is just along for the ride on top of the body, but it also takes in everything around us through our senses.  And there are some animals that act wholly like a human head!  They take in things, and react.

We went to the aquarium to get a first-hand view of a cuttlefish (and of course they had taken the tank of cuttlefish off display before we got there!  Ugh!) but we talked about the large eyes of the cuttlefish, how the cuttlefish hardly moves and has to take in water and squirt it out to propel himself, and how even his skin changes color in response to what he sees in the environment or how he is feeling in response to what he sees in the environment.  Here is my daughter’s picture, this was from the fall.  You will see a great improvement in her writing and drawing skills when I post the second block of this study, done in the spring. 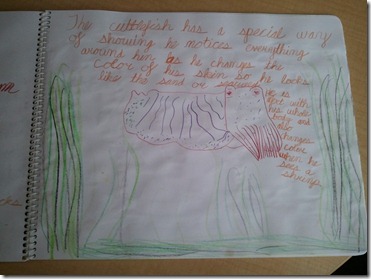 Our second animal that reminded us of a human head was the snail, easy to find in the garden and catch for a close-up look (always start with the active observing!)  We used this opportunity to practice hatch drawing, a skill described in Marsha Johnsons’ free files and also in the book, “Drawing From The Book of Nature”.

There is a great chapter on the snail in the Charles Kovacs’ book, “The Human Being and The Animal World”.

For animals that seemed especially adapted to their environment due to their trunk, we  specifically at the seal and at  the Eastern Harvest mouse.  (We had seen seals at the aquarium, and since I like starting with activity and real observation, that worked out nicely.  There was a nice chapter in Charles Kovacs’ book about the seal and the harvest mouse as well, although I did add in details that were specific to the Eastern Harvest Mouse of our region.    We also did a number of fun poems around mice, great practice for oral and choral recitation, handwriting, dictation, spelling!

Here is my daughter’s seal picture: 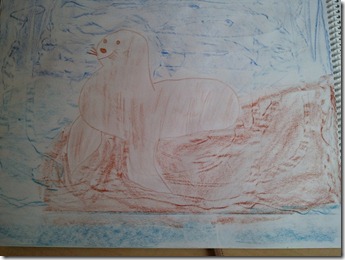 Finally, we looked at the special limbs of different animals – well suited for their environment or the way they move.  And we finally compared that to the human being and discovered that we have hands that may not be specialized for flying, digging, or swimming but can serve others and the world.  We traced our hands and showed that our hands are also the way we worship God, by serving each other and doing something positive for every thing we see that needs help.  This is beauty in our world.

In our second block, we moved into the different types of animals and looking at how they are intertwined with their environment, how they are specialized for that environment in many ways, and how different groups really contrast each other to give the fourth grader the most lively picture of the animals, and really whet the appetite for wanting to know more about zoology, biology and other sciences in the future.